Did the ‘Reddit-Raiders’ suddenly shift their crosshairs onto the energy complex?

The last few days have seen WTI Crude surge over 6%… 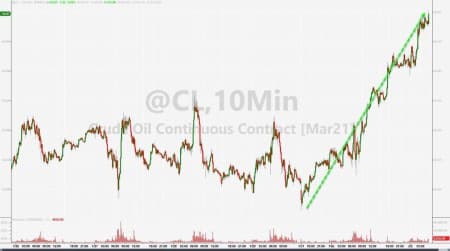 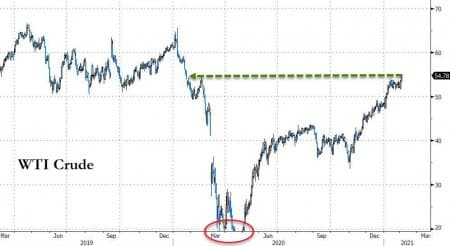 The catalysts for the move is uncertain amid mixed data from OPEC – on the bullish side, compliance with planned cuts was extremely high; on the bearish side, the cartel cuts its oil demand growth outlook to 5.6mm b/d (down from previous 5.9mm b/d), but back on the bullish side, the Saudis and their friends see the oil market in deficit by Q2.Related: Tesla’s 20 Million EV Ambition Faces Huge Mining Challenge

Citing an internal OPEC document, Reuters reported on Tuesday that the organization lowered its oil demand growth forecast to 5.6 million barrels per day (bpd) for 2021 from 5.9 million bpd in January’s report. Additional takeaways:

“OPEC+ panel sees global oil demand at 97.9 million bpd in December 2021 under the base scenario.”

“Under the base case scenario, the oil market deficit is expected to reach a peak of 2 mln bpd in May.”

And on the other side of the ledger, OilPrice.com’s Irina Slav notes that OPEC+ members complied almost completely with their production cut quotas last month, an unnamed source from the extended cartel told Bloomberg.

At 99 percent, according to the source, the compliance level was based on preliminary estimated, to be reviewed tomorrow by the Joint Technical Committee of the group.

OPEC+ agreed to cut 7.2 million bpd in combined production in January, in what was widely seen as a compromise decision for aggressive cutters like Saudi Arabia and more reluctant ones like Russia, which proposed adding 500,000 bpd to the group’s production each month between January and April. For February and March, the cartel agreed to keep production cuts at 7.2 million bpd.

This may change after tomorrow’s meeting but is not very likely. Global demand has been on the mend but so has supply. Therefore, chances are that OPEC+ will stick to its current production cut levels, with Saudi Arabia unilaterally cutting an additional 1 million bpd to keep prices higher.

Meanwhile, however, OPEC’s overall oil production rose in January, according to a Reuters survey, for the seventh month in a row. That’s despite Saudi Arabia’s deep cuts and Iraq’s compensatory output reductions that the country said it would implement in January and February to make up for its non-compliance last year.

“The increase is natural with the higher production ceiling from January,” one OPEC delegate told Reuters.

Interestingly enough, the biggest additions to OPEC’s total for January came from Saudi Arabia and Iraq despite their commitments, the survey found. The third-largest output growth came from Iran, which is ramping up both production and exports in anticipation of the Biden administration lifting sanctions.

Meanwhile, U.S. producers are being cautious. Production is still around 11 million bpd as drillers wait for higher prices for longer before they start ramping up. A set of Biden executive orders, meanwhile, have restricted new drilling, which would eventually have a positive effect on prices, and we may see the start of a production ramp-up later this year.

All in all, slowly but surely, the oil market is crawling towards rebalancing. It won’t happen quickly, and there will almost certainly be setbacks amid the emergence of new coronavirus variants that medical experts warn appear to be more highly contagious and possibly more deadly than the original strain. Yet if OPEC+ sticks with its cuts and vaccinations progress, despite the challenges, the world—and oil demand—will start to return to normal before this year’s end.